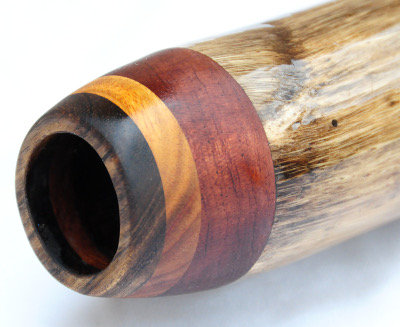 Another one of my new smaller didges that has a really nice solid drone and a ton of capabilities. This was a huge agave and this stalk has all the flower branches at each curve trimmed back for added flare. I love how this one plays. I have always enjoyed these smaller straight agaves for the  sweet drone they have and being closer the bell as a player is really nice as well. The overtones, vocals, and bass in the drone are all great on this one.  Another one perfect for travel and around the home and also with its volume it plays much bigger. A steal for this little powerhouse! 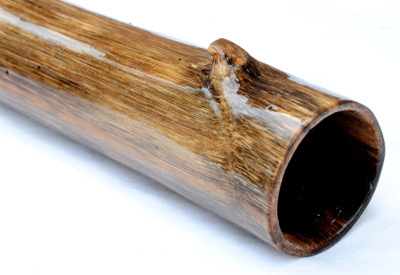 Sold, thanks Brittany! in Pooler, GA 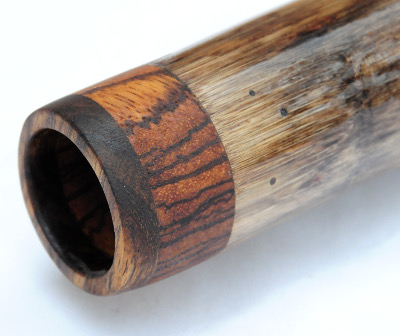 This one has some beautiful curves and when you look down it while playing it looks a bit like a cork screw. This is quite a thin didge so it excels in the response and vocals erupt out the bell. Another one that I am crafting in the more affordable range. Its not the biggest agave but plays so nicely and is really great at fast styles of playing including beat boxing. With the long narrow neck overtones are quick and you can do a lot of really fun quick rhythms with ease as it takes hardly any breath. D# has always been one of my favorite notes for quick and explosive rhythms for some reason and this one is no exception. A great starter didge! 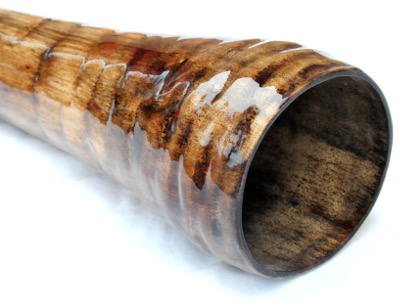 Sold, thanks Matt! in Auburn, CA 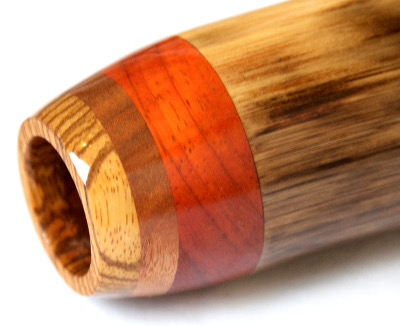 I love the key of F and if you have been playing for a while and haven’t tried a higher pitch didge you are in for a treat. It can open up new worlds in your playing and this one has so much energy and response. It loves to go fast with explosive abilities and vocals. It also know how to slow you down and pushes you to create amazing ambient landscapes with lots of diaphragm work. For its size this one also has a really nice bass tone to it that fits the drone beautifully. I would suggest the higher notes to those that are more comfortable playing as they take a bit more control. If you are there you should check out a higher pitch key and see where it takes you! 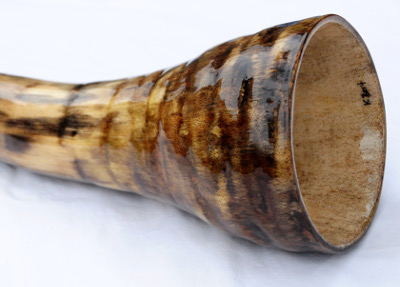 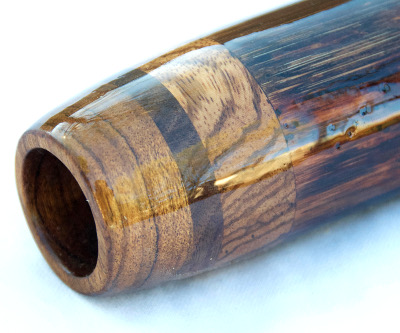 This beautifully tapered old soul will be great for the ultimate beginner to the most advanced. It is so easy to play and has so many capabilities. with the thinner neck and thicker wall thickness the overtones on this are reached effortlessly. The strong back pressure make circular breathing a cinch and for those still learning the process this would be a perfect one for you. Vocals are strong and loud and really project out the huge bell. This old soul was a big bug hangout spot and you can’t tell from the photos but there is a ton of turquoise inlaid on the top side near the middle of the stalk. The possibilities are endless with this one! 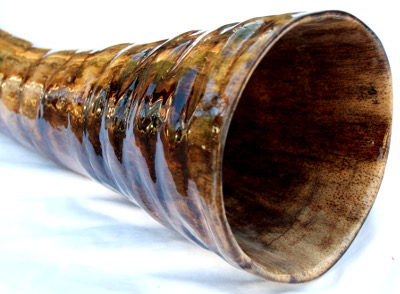 Sold, Thanks Chris! in Rockledge, FL 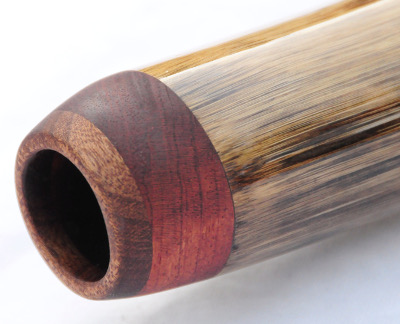 This didge was such a surprise to me as when I was working on it I assumed it would be in D or C#. I have started to craft a lot more of these smaller  and more affordable didges and are loving how they are turning out and sounding. To craft an agave didge in B it is usually as tall as the player. This one at 56″ would be great for someone wanting to explore these deep notes without having a huge didge that is harder to travel with. This was an extremely old stalk and had so much bug activity that there is more turquoise inlaid in this than almost any didge I have worked on. you cant tell from the photos but there are over 50 inlays throughout. It is pretty striking to see it in person. It plays with such ease it feels like it practically plays it self. This has very strong back pressure and takes so little breath you might try to over blow it at first. Great for learning circular breathing! The overtones are so easy with its narrow bore and the drone has a quality that is hard to describe but feels so deep. B is a great note and this would be an awesome addition to someone looking for a deep meditative didge. This one just keeps wanting you to come back and play it and have really been enjoying it before it finds its new home. 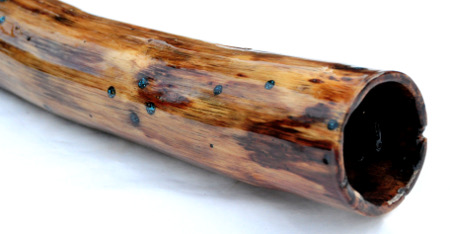 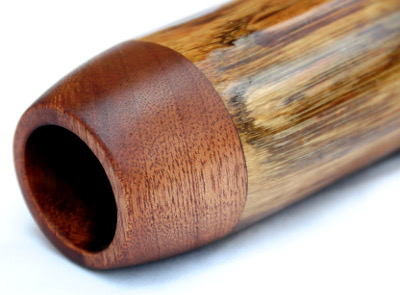 I have started to make some smaller travel didges that are easier on the pocket book as well. When I was working at Gibson guitar my favorite guitar was the Robert Johnson. Smaller in stature I just loved how the looked and sound. This one plays so wonderfully and despite its size it packs a punch. I love the solid drone on this one and the overtones are a cinch. This is some absolutely beautiful wood grain and tone and some of the densest agave wood you will find. This thing is extremely responsive and if you closed your eyes you would think you were playing a didge twice its size. This one is ready for some travels or a great player for the home. Perfect for the beginner as well. I think it’s a steal at this price for how great it sounds! 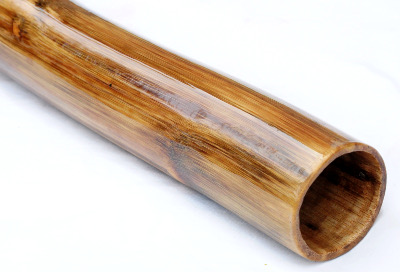 Sold, Thanks Natalie! in Dallas, TX 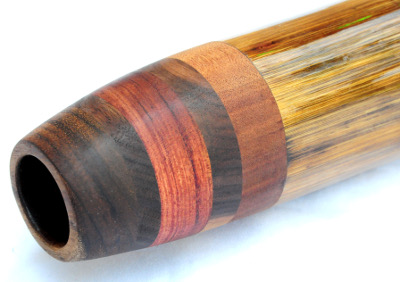 I drove by this impressive stalk for 2 years as it was perched so nicely on a little hill and was especially beautiful at sunset with the Santa Rita mountains in the background.  The photographer in me left it up for this long even though I wanted it so badly. It had finally succumbed to the desert and was ready to fall and be brought back to life.   It was definitely worth the wait as this is an incredibly powerful didge. A# is one of the most popular keys  and for good reason. It is such a powerful note and is instantly mesmerizing for both the listener and player. This one has really nice strong back pressure that makes it so easy to circular breathe and these long deep notes also require hardly any breath. Awesome vocal and overtone ability with a nice balanced drone with a bass punch that is unreal.  If you like meditative and ambient style of playing this would be perfect but this can also play with great speed because of its taper and length. If you have never played one of these deep keyed didges you’re in for a treat! There is something magical about this didge. 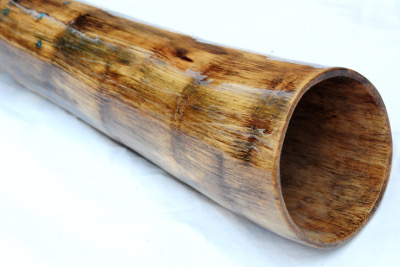 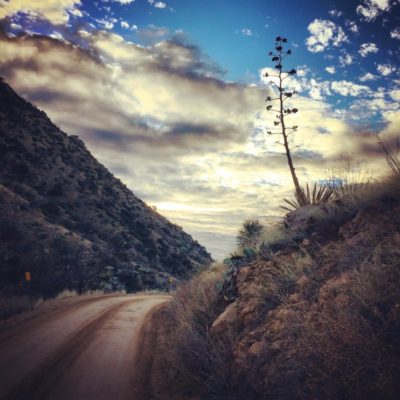 Sold, thanks Thomas! In Oslo, Norway 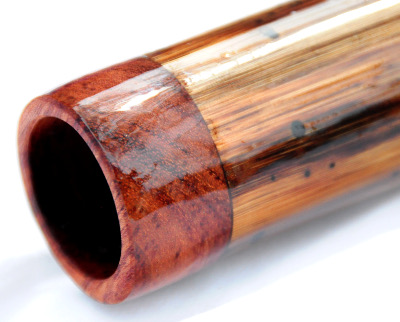 I built this one for speed and percussive style of playing. One great thing about fusions is that you create a piece that would be hard to replicate in nature. For the top half I found  a really nice smaller agave stalk that would have been to small for a didge on its own but matched perfectly with a the bottom half which is a really nice old portion with tons of bug activity throughout. The two fit perfectly together joined by both cherry and maple pieces and create such an explosive and responsive didge. This one takes hardly any breath because of its shape and would be great for those that are performing and also looking to play in a faster more beat oriented style and overtones. As with all didges it also is so responsive to an ambient style. Been having a blast playing this one! 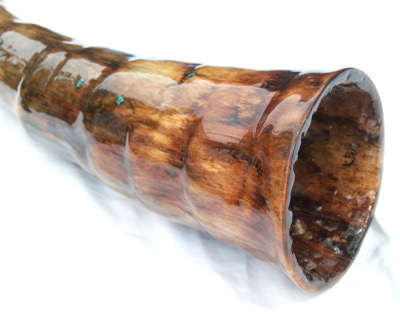 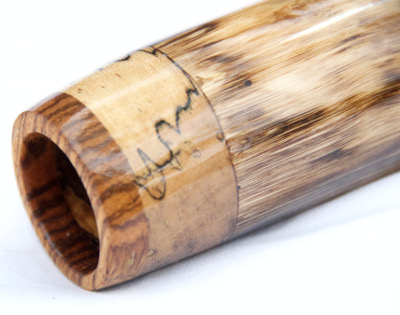 Calling all sound healers and those using didgeridoo for more meditative purposes.  At 6.5 ft this didge packs a real punch. It registered in B at 432hz which is one of the most popular tunings for sound healers. B is the crown chakra and this one can take you to an other worldly place. Such an amazing key and if you haven’t tried one of these really deep notes you are in for a treat. At such a great length and long narrow neck this one takes so little breath and is so responsive. Easy overtones, amazing traveling vocals, and nice bass in the drone make this one a special didgeridoo. Playing in an ambient, meditative style has become more important to me now. Maybe it is reaching 40 where I just appreciate where it takes me and is so soothing to the soul. It becomes almost like a natural synth. I have my eye on this one and if its on here at the end of March it might be joining my  collection. A really special didge! 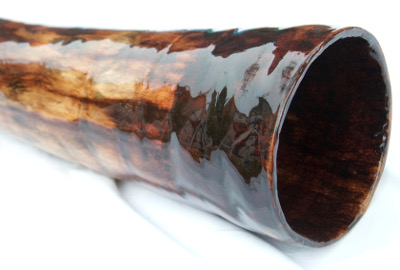 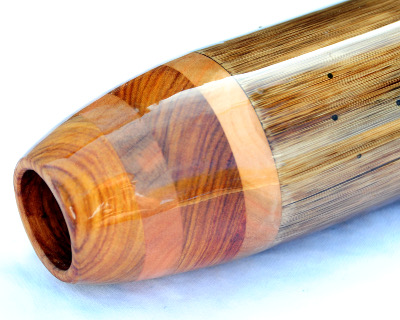 At 6 ft with a 9 inch bell this is one monster didge!  Agave wood is so amazing in that even at this size it probably only weighs about 4 lbs. This has SO much volume and power it is hard to describe in words. It plays with such ease and punch with amazing response to every little manipulation in sound. Playing a didge with this much size and power is quite an experience. You can feel the whole didge shaking when playing it and the sound fills a room with its balanced and beautifully bassy drone. Vocals explode out the bell and chanting with it takes you to another meditative place instantly. With its shape it is able to play with such speed with ease as well. This registered in at perfect C at 440 for those playing in bands where tuning is important. This didge will take you to another level and create so many new sonic journeys! 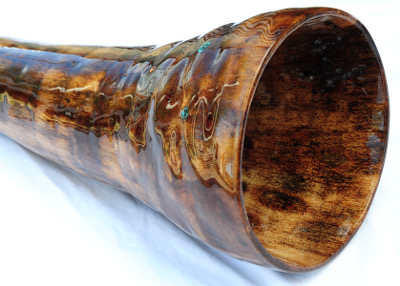 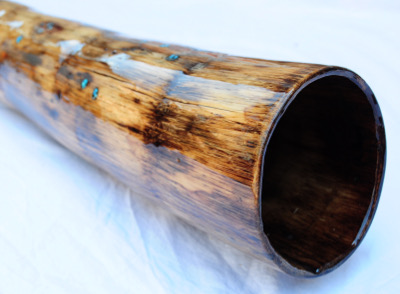 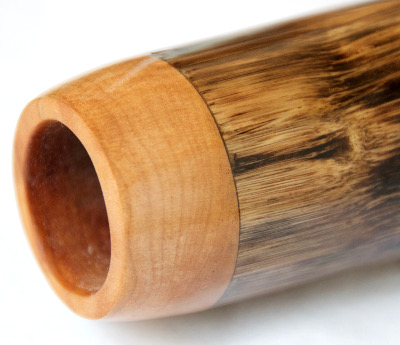 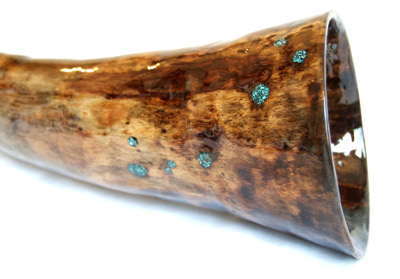 Sold, Thanks Diana! in Bemidji, MN