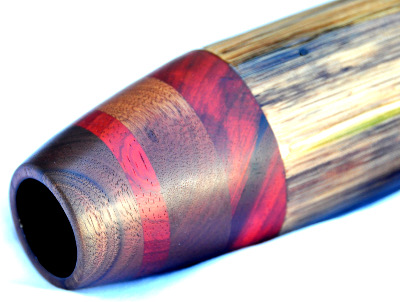 This is such a beautiful old stalk that has so much character in both appearance and sound. I really love how it plays and have always enjoyed these stalks with more length as I love the effect of traveling sounds. This one has really great back pressure and takes such a small amount of breath making it a great didge for beat boxing and percussive styles. It really excels as well in ambient style of play with its deep rich bass filled tone. The overtones are so bright and easy to find with its thick walls and taper. As always these Old Souls have lots of visual stories in the wood and this one has a good amount of turquoise inlaid throughout. This would be a great didge for any skill level and a real beaut! 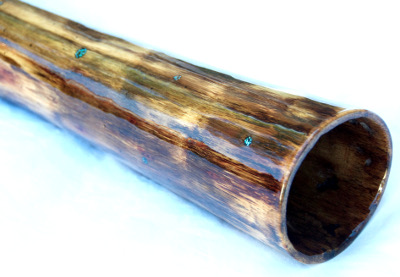 Sold, Thanks Nathan! in Austin, TX 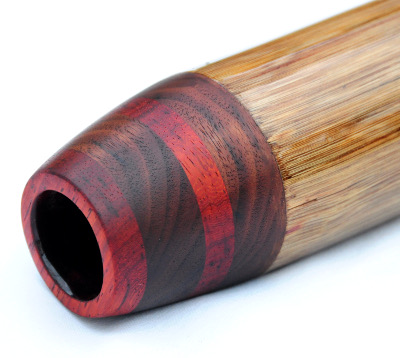 On a recent camping trip I found this amazing stalk. I was on a trail pretty far back in and found an amazing stand of agaves. I could only carry one out and this is the one that caught my eye immediately.  I am blown away by this stalk as it is probably the densest  agave I have ever found in the 19 years making them. When you pick this one up you just feel the power it has. The strong drone is so rich and the vocals and overtones so clear and precise. It plays with such ease and needs hardly any breath with its strong back pressure. I already have 3 C’s in my collection or this would be in there and might end up in my collection if I get to play it enough. From the moment I played it I didn’t want to put it down and kept coming back to it. I wanted to also give a brief history about the mouthpiece. Knowing this was a special didge I wanted to use the black walnut my uncle recently sent me. It is from the Walnut tree that grew on our family farm in Kansas. My great grandfather had it cut down and was air dried in the barn. This was over 60 years ago and the wood seems to just sing when you knock on it. I felt the character and age of the wood seemed fitting to be part of this Old Soul didge. A truly unique, special, and rare agave didge!! 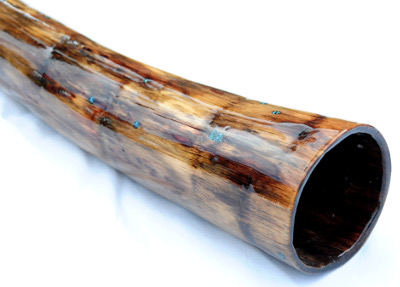 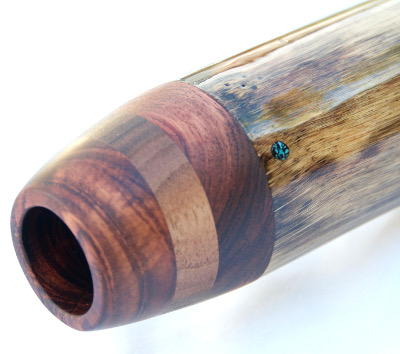 I have been making a lot more of these smaller didges that are really great for beginners to advanced but are at a lesser price point. This D# registered in key at 432hz and although this can fluctuate with humidity and temperature this is a really healing didge. It has such a balance with its drone with bass and percussive qualities and is so easy to play. This is explosive rhythmically as these smaller agaves pack a punch and still have a great amount of volume. This one has medium to thin walls and so the vocals are extremely loud and clear there are so many harmonic  qualities going on when you push it in the right way. Also easy overtones and strong back pressure. This is such a fun and powerful didge and would be great for so many styles of  play! 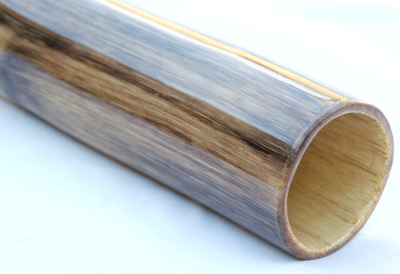 Sold, Thanks Marc! in Glendale, CA 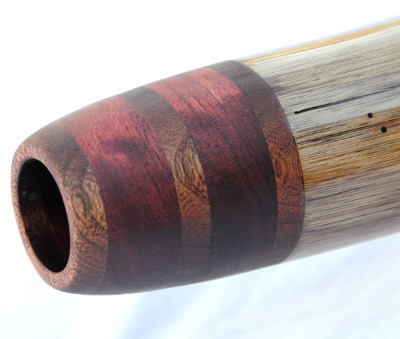 F is for fire! this didge has so much volume and power. I love playing these shorter thick old souls and they just seem to have another gear. This one is so responsive and plays with amazing speed but also loves to play in an ambient style as well. I recently played this one at a Reiki circle and people loved it. Seems F is always such a popular note and it makes sense as it is related to the heart chakra. This one has such nice dense thicker walls and weighs as much as a lot of agaves much bigger in size. This one would also be great for travel and sound healing with its size. The drone is so solid with nice bass tones, awesome vocals, and overtones. I have had so much fun playing this one and know it will bring out lots of new ideas, sounds, and rhythms! 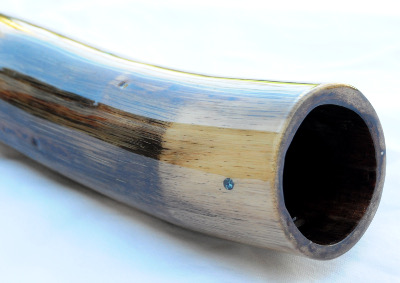 Sold, Thanks again James! in Greenwood, IN 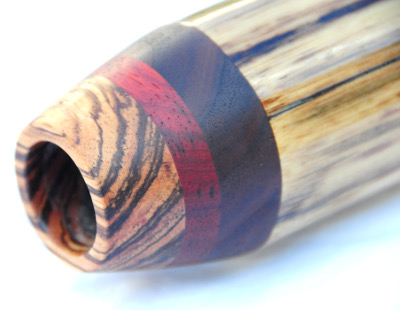 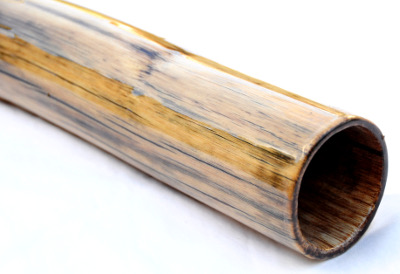 Sold, thanks Dustin! In Chicago, IL 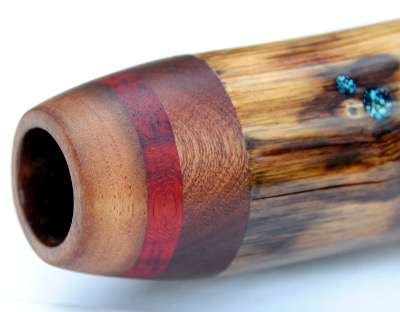 I love making these smaller agaves as they are so fun to play on and so light that you can take them out on hikes or around town so easily. This one probably only ways 2 lbs but like all agaves packs a punch. These shorter agaves I had a customer compare to a street bike as it is so fast and has so many gears. They are great for ambient style play and fast rhythmic play. Also would be great for sound healing with its size to move around with. It has a nice drone full of bass and great vocals and nice overtones. A great little didge! 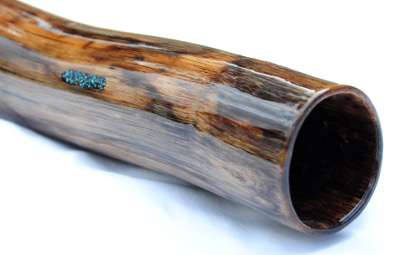 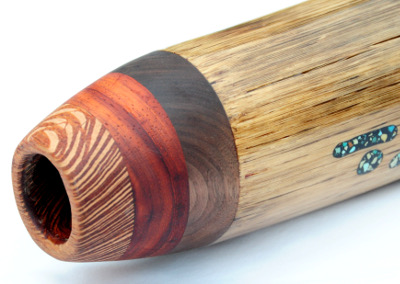 Here is another monster Old Soul agave didge. Yes, this one actually has a 9″ bell! With such a large bell it can actually stand up straight:) This is an extremely old stalk that has some really nice dense thick walls. It can play with more volume than maybe any didge I have ever made. It excels both rhythmically and in ambient style of play and has amazing vocal potential. The drone is full of bass with its big bore and has such a good feel to it. If you are busking or playing with others you will definitely be heard. This is a great didge for the serious player and could inspire so many new ideas. Also great for a sound healer with its tuning and calming bass frequencies. This one has to be played and seen to be believed! 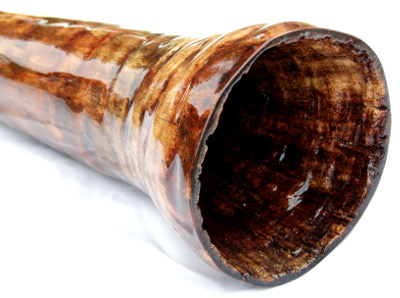 Sold, Thanks Jimmy! in Greenwood, IN 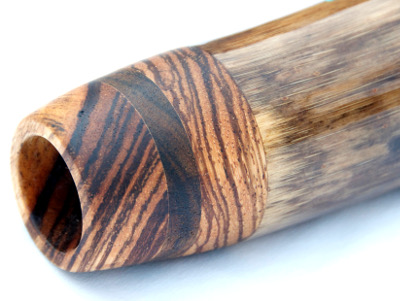 Just recording this didge I immediately noticed how responsive it is and how good it made me feel! This one may fluctuate a little on key as it seems to sometimes be more of a D# and sometimes can register a bit into the D range. It is a bit of an in between note so if you need to be in a perfect key this might not be the one for you. I like to go more on feel when I am not playing with tuned instruments and this one has a such a great feel to it. Has the ability to play with great pace with the incredible taper to that huge bell but plays so beautifully in an ambient style. The curve one this one is so amazing and has really nice dense wood that tapers to create a resonator like bell that has a ton of volume. This Old Soul had a ton of bug activity which translates to a ton of turquoise inlays throughout not seen in the photos. The turquoise goes so well with the beautifully varied pigments. You can also see some termite activity in the bell photo which adds some great character and shows the age of the stalk. This was such a fun one to work on and now play! 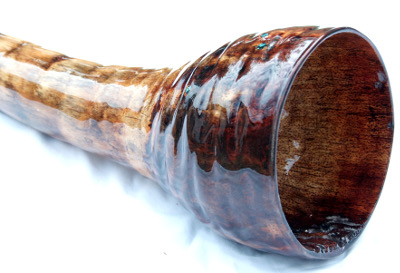 Sold, Thanks Eric! in Breckenridge, CO I created this didge with the ultimate beginner in mind. It would also be  great  for someone looking for  a smaller traveler style with its size and light weight. I know when you first start playing it is hard to know if you will really get into the instrument so wanted to make a more affordable option. D# is a great key to start on and this one with its narrower bore has strong back pressure to aid in learning circular breathing and the drone is easy to find and has a really nice balanced tone. Despite it’s size it can play with lots of power and speed and would be great to learn on. With its smaller bore size it will also help while learning toots and is great for vocals as well. As a traveler and only weighing about 2 lbs you can take it out on hiking adventures or take it more places than the larger didges. Maybe this is the one to start your journey with or for the experienced player to take on other outside adventures! 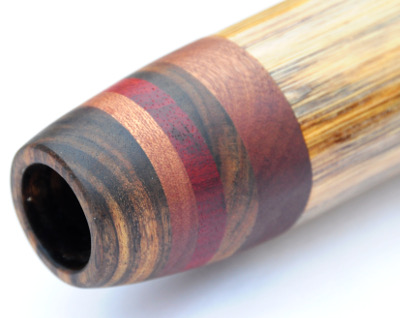 The agave plant is such an impressive plant that I just can’t gush enough about it. I am still in awe every time I go out and collect the stalks and think of their path from seed to this giant flower. This cam from an enormous agave which allowed me to leave on the flower nubs for the entire length of the didge. I have always love the looks of these and how each nub is on a subtle curve of the beautiful flower. These big agave have extremely sturdy stalks and this one has such dense resonant wood. I love how it look and love how it plays! A friend recently wrote me about solfeggio frequencies.  He told me that C tuned to 444hz is one. I then realized my two C’s in my own collection were both in that tuning. This one also registered in 444hz , which can obviously vary with environment being a wood instrument, but his one has such a calming effect on the player and sure the listener. It has such a nice deep bass drone with easy overtones and clear loud vocals. A great one for the beginner to most advanced!

Sold, Thanks Andrew! in Boise, ID 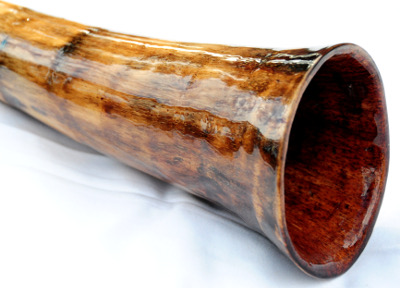 Sold, thanks Stacy! in Leverett, MA 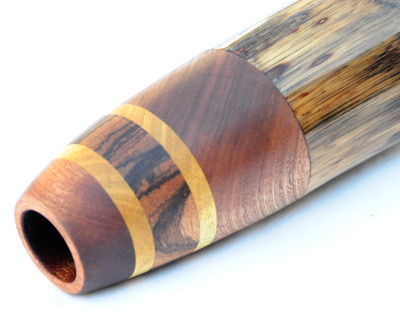 I have been waiting to work on this stalk for a very long time. This extremely old stalk has such an incredible shape, bell, and the wood so much resonance. Talk about a monster didge. I can reach my whole arm into the stalk and flap my hand around. This chamber has so much bass and such a soothing tone to it. It is an absolute rhythmic machine. It has just the right amount of back pressure that I like to play in a both rhythmic and ambient style. As you can imagine the volume on this is tremendous and the vocals sound like they are amplified. If you are a performer or busk this would be amazing to draw attention and be heard. C# was the first note that I really fell in love with and is still one of my favorite keys. It has such a grounding feel to it and is connected to the Om or root chakra. I love how this grounds me when I play it and this would be great for every style of playing from sound healing to beat boxing styles. A truly remarkable instrument. 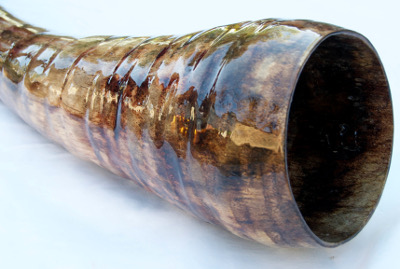 Sold, Thanks as always Jeff! in New Rochelle, NY