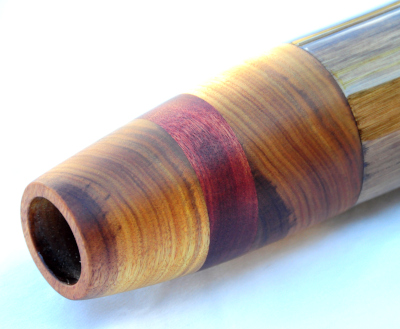 After all these years I am still in awe  by agaves and how many uses they have. It is incredible being out in the field and see these flowers tower over nearby trees and dot the hills with their amazing silhouettes against the desert sky.  Pure magic! This one really shows just how amazing this plant is.  As you can see from its dimensions this is a huge didge with that 8.5″ bell and weight that is twice as heavy as most agaves. The size and thickness gives this one a ton of power and the drone is so rich and the overtones so bright. Incredible vocals as on all agaves and this one just has a great feel to it. On top of that the wood grain is just beautiful and so varied in pigments with added turquoise throughout.  Really special to find agaves this size and is a special instrument! 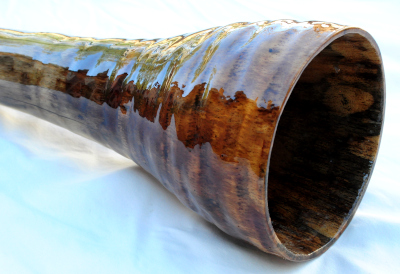 Sold, thanks Rek! in Dallas, TX 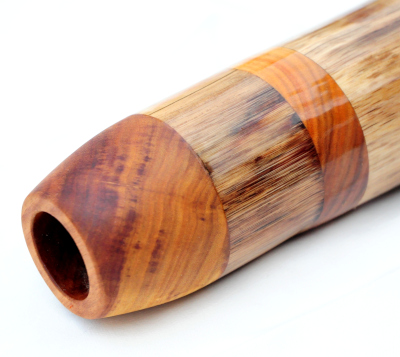 This didge has such a calming affect when playing it. While recording  I was so soothed by the bass filled drone and it  plays so wonderfully in an ambient style. Not to say it can’t play well in other styles as it is really strong percussively but this one really wants the player to slow down and experience all these tones. It has amazing vocals and harmonic response and back pressure.  I have a lot of these more open bore didges in my personal collection as I just love how they play and the added bass from the shape. I think this would be amazing for someone using didgeridoo for sound healing or meditation. With its ease of play it is perfect for every level player and such a cool art piece! 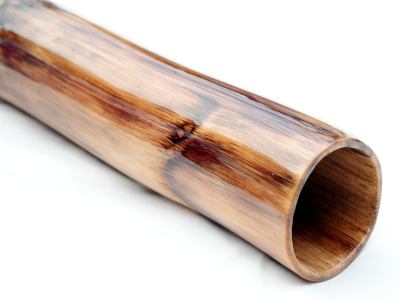 Sold, Thanks again Christian and Kristen! in Miller Place, NY 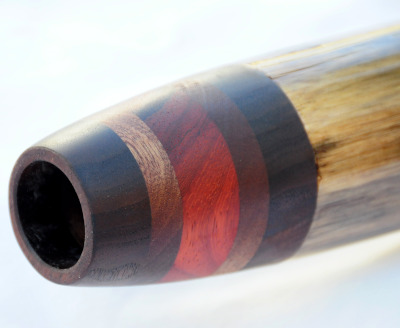 This is one ancient Old Soul with a ton of character that plays with such power. This stalk had to have bloomed over 3 or four years ago and it shows as there are numerous cracks, bug holes, and termite activity inside and evidence in the exterior as well. I see these as art so love to leave a lot of the imperfections visible in the exterior. The cracks and bug activity show its long life in the desert over numerous seasons and give is such a rugged appearance. Some customers have worried about leaving the cracks without filling them but be assured that they won’t spread or go through and don’t affect the sound quality. Most in my collection have a similar appearance and sound better and better with time. A# is such a magical key and always has an immediate calming affect on me. This one has great volume and power with it drone full of bass. Vocals and overtones are so crisp and clear. This one plays with real pace as well as excelling in an ambient style. A really incredible player that would fit perfectly for someone looking to explore these deeper keys. 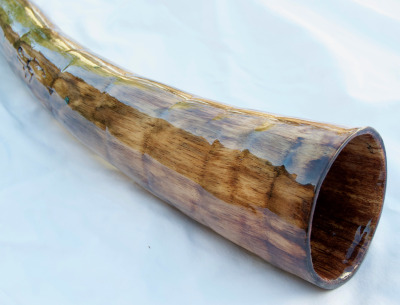 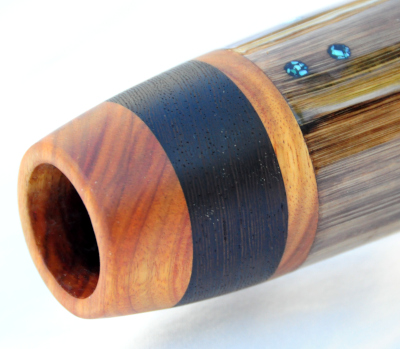 I just love the shape of this one and the bell with the way it tapers back down acts as an almost resonator sound chamber giving it a unique sound. This one plays with such ease and is so incredibly responsive. Really nice easy transitions to overtones and vocals are so bright and have so much volume with that bell. The drone has such a nice balance and takes so little breath with its strong back pressure. This would be the ultimate beginner didge as it will really speed up the learning process and advance on and think C# is the best note to start on. For the intermediate and advanced player this one will inspire so many new sounds and rhythms and is just so electric and responsive. Such a cool didge! 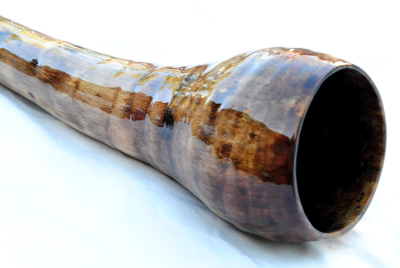 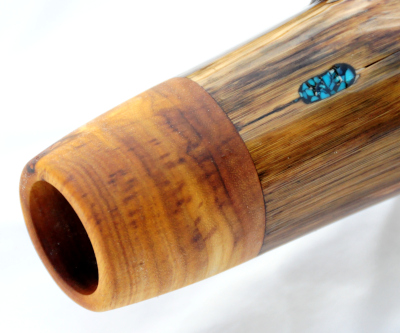 I have been working for about a month on the this one as it has more inlays than any other I have made. As I brought it in the house from the workshop the sunlight hit it and was just so blown away by the beauty and soul of this stalk. To see all the turquoise in contrast with the dark old wood grain is just so incredible. When I began working on this stalk I knew it would take a while and to see it finally finished was so rewarding.  As you can see from the photo the bell is also different as all the bug activity has created a lot of texture. It just adds to the beauty of the stalk and feel it adds character to the sound. This one feels ancient and wise and has stories to tell and plays with such power. Perfect for any level player and has such an ease to the way it plays with a nice balanced drone, awesome vocal ability, easy overtones, good volume, and just a beautiful didge on top of it! 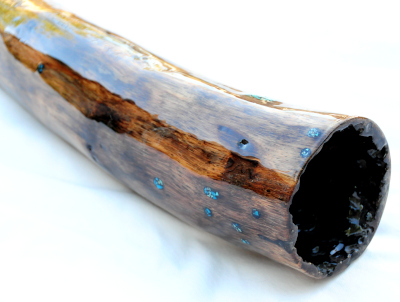 Sold, thanks Clifford! in Davis, CA 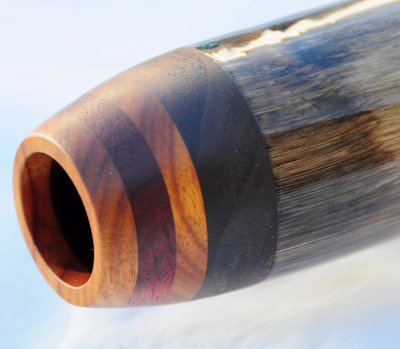 I think A is one of the most mesmerizing of all the keys. They are rare to find as they have to have such great length. I have only made 6 in all the years of making them and they have all gone fast on here. This one has such a nice feel to the drone with lots of bass tones and has incredible overtone and vocal abilities. If you really enjoy the meditative part of playing this would be such a great didge as it instantly puts you in such a calm space. Despite its size this one only weighs around 3-4lbs so would be great for sound healing as you can still move around with it and projects a ton of volume being a thinner walled stalk. If you haven’t played an A ever this would be a real treat and take you to another level and place while playing. 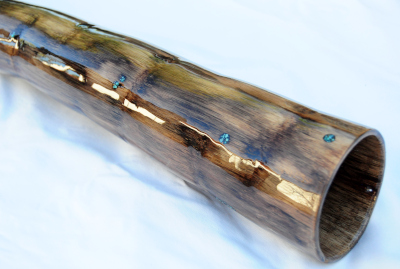 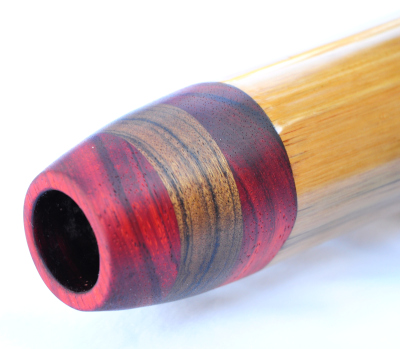 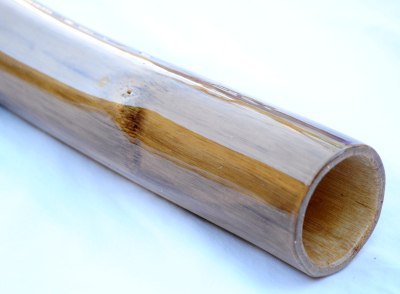 I am loving all the C#’s on the site right now. Seems the universe is speaking to me as a lot of these I expected to be in D or C. C# is such a grounding and earthy note and just love how it makes me feel. I played this one the other day for quite some time and felt so calm afterwards. It has just such a nice full drone and easy overtones and beautiful vocals. I think this would be such an amazing first didge for someone as it is such a great key to start on and perfect  for traveling so you get more practice time in and just so easy to play. For the most advanced player I am sure you will find the way this one plays inspires new ideas as it did for me. A great didge for all levels! 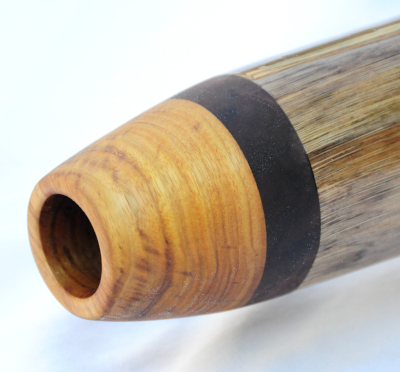 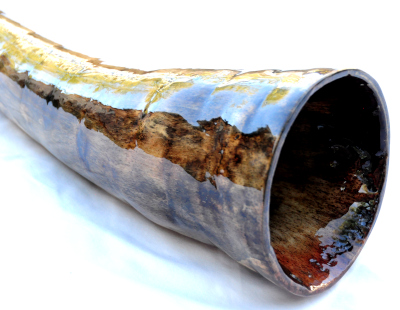 I have been really into making these ancient stalks that need a ton of love and time to finish. I find these older stalks have the most dense wood from so many years baking in the sun and only a few make it through so many seasons of extreme heat and sometimes even very cold weather in these higher elevations as agave start to grow at around 5,000 ft. This one as you can see from one of the photos had a ton of insect and bird activity and a lot of turquoise inlaid. It looks so beautiful with the  varied wood grain of this agave which you can kind of tell from the photo but has light, dark, and even pinkish pigments throughout. F is such a powerful key and always the group favorite at a Reiki circle I sometimes play at. Makes sense being the heart chakra and this key just makes me feel so good and at peace. These bigger bore high notes have a sort of overtone in the drone and so mesmerizing to play in an ambient style. It can also play with great speed and volume with its incredible shape. Great vocals and overtones. Seeing and playing this in person you can feel its power and wisdom right away. If you haven’t explored these higher keys now is the time!

Sold, thanks again Kristen and Christian! in Miller Place, NY 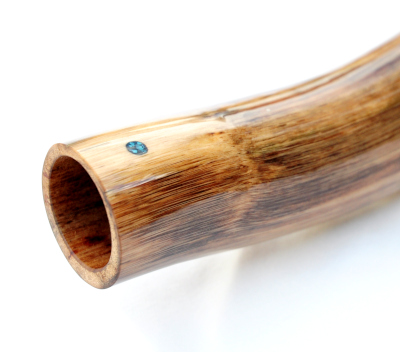 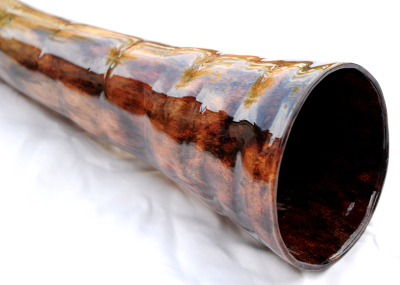 I had such an amazing fall harvest this year and did a lot of traveling while finding some great new honey holes. This is one that I was so excited to work on as it was unusual with its taper while still having really nice wood density. Making these thinner bore didges is actually the most technical as there is very little room for error when boring them out. This one was such a challenge and it was so worth it. This reminds me of one of my E’s I have in my personal collection. Almost exactly the same dimensions. It is one of two that  I  always bring with me when playing out because of its wide range of capabilities.  This one has amazing overtone and percussive capabilities and is just so easy to play at  extreme speeds while taking very little breath. Vocals are so bright with great volume and drone is just so sweet. I thought it would be really cool for a change to play right on the agave as the mouthpiece was already the perfect size. I always love carving wood mouthpieces and the look they add but I love the look and feel of playing right on the flower stalk.  If I didn’t have two E’s in my collection this would be added to it. An amazing didge! 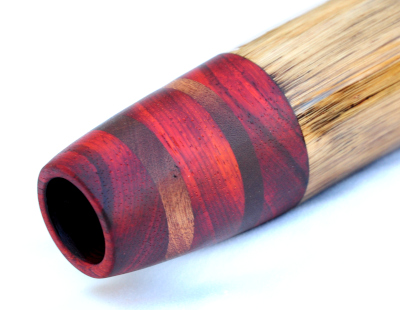 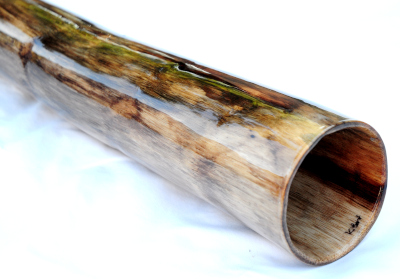 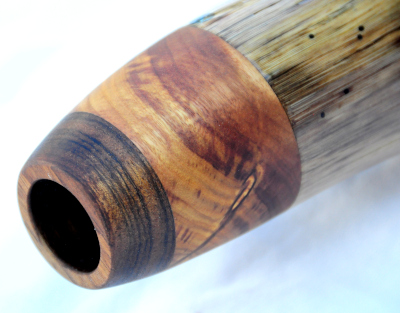 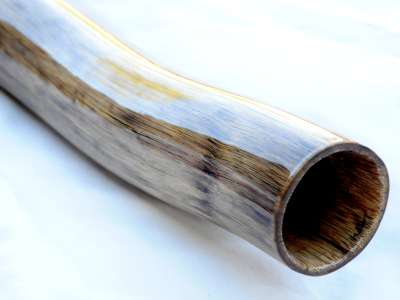 As you can see this is such a unique and colorful stalk. I found this on a camping trip in one of the most beautiful parts of AZ. I ended up collecting a lot of really old stalks that had huge splits and cracks but when I knocked on them had such amazing resonance and forms that I collected them anyway. I have recently been working a ton on these older ones that seem to be gone forever but instead are turning into these amazing and unique instruments. This one has such amazing symmetrical curves and at one of its curves it split and scarred really badly but actually turned to a really hard inside the split. I was able to fill this with some hard to find sleeping beauty turquoise from right near by in Bisbee. The merlot pigments along with the whites and darks and turquoise make for an impressive art piece. It plays just as beautifully and this one reminds me of my only D in my personal collection. Nothing too flashy but when you play it you can just feel all the abilities it has. Amazing response with a mesmerizing drone, great vocals, easy overtones, and takes so little breath. I am so excited to see where this one ends up. As you can tell I so enjoyed making this one and now playing it!  A rare gem!!

Sold, thanks Kristen and Christian! In Miller Place, NY 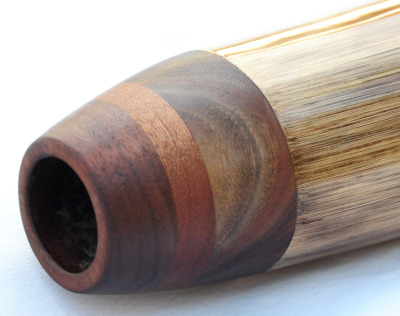 Here it is…lucky #300! I don’t know really how else to describe this one other than it has a ton of personality! I can’t believe how responsive it is. This would be so great for the beginning player that is experimenting with new sounds as you will hear every tiny manipulation out that huge bell and inspires lots of creative ideas.  The most advanced player will surely find new sounds as well as this didge feels almost electric. It takes hardly any air and can play with such amazing speed. Outstanding vocals and plays so well in more acoustic and beat boxing styles as well as ambient with its deep drone full of bass. #300 registered in a little deeper C and a higher B so  has a unique sound quality to it.  In addition to all of its skills it is such a beautiful old stalk with a ton of color variation and many turquoise inlays where bugs once resided. This one will surely inspire lots of new sounds and rhythms for all levels! 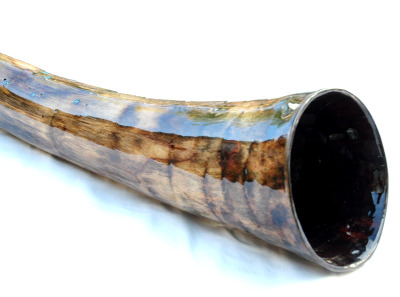 Sold, Thanks Omar! in Olympia, WA!